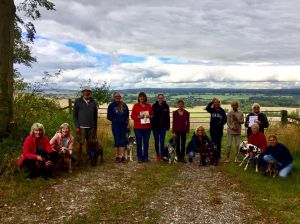 It was a slightly grey day for this Level One trial at the Scent Barn at Longbridge Deverill, but thankfully no rain, and less windy than my last judging appointment here! We had 12 competitors taking part, and got started around 9.30am with the Tables & Chairs. I decided to start with this search as it’s usually a fairly straightforward one, and I was hoping it would prove a confidence boost to everyone, and was proven right when everyone found the correct chair in under a minute, with standout performances from Denise & Lyle, Sandy & Ella, Lucy & Rosie, and Sharon & Sophia. We then went outdoors for the Vehicle search, with 11 of the 12 passing this element. The standout searches here earning full marks were from Helen & Lizzie, George & Gwyn, Sandy & Ella, Lucy & Rosie, Sharon & Sophia, and Sue & Isla. We then did the Exterior Items, and this search proved successful for all 12 teams again. I had scented a fairly early item, second in on the left-hand side of the search area, and this proved almost too easy as most dogs had air scented it to some degree from the start line, and they almost all went flying off straight to it, with 6 of the 12 finding it in under 8 seconds! It takes real courage to call an early find when your dog has sniffed only two items in the whole search area, especially at this level, so I applaud the handlers for trusting that their dogs were right and making such brave calls! Back indoors for the Containers & Luggage search, and here 11 of the 12 were successful, and there was some lovely searching from all teams. I really like to see dogs being set up and cued to work with a nice start line routine and good direction from the handler from the off so that the dogs know what they’re supposed to be searching, and there were some really good examples of this from the competitors today, in particular from Denise & Lyle and Sandy & Ella.

I was delighted that every team passed, and it was very close at the top, with Sandy & Ella and Sharon & Sophia both gaining the full 100 marks with foot perfect performances from the dogs and their handlers. Thanks to Rick and Kate for inviting me to judge at Scentwork Wessex, to Mandy for scribing for me, and to the competitors for taking part in such good spirits. Great day!

My thanks to Rick & Kate for asking me to judge their L2 trial consisting of 12 competitors. Also to Mandy Murray my scribe and Sue Ashby runner who I believed helped all day.

We started with the boxes & Luggage which surprisingly was the search where the majority of teams had the most success. I really liked the way most of the teams tasked dogs their dogs before the search. This enabled the dog’s to get into the right mind set especially the over enthusiastic ones which were plentiful here today. Particularly memorable were Michelle & Frankie the rather keen GSP and Pam & Pasha with her BSD finding both finds in just 25 and 34 seconds. With the majority of teams finding two in a matter of seconds resulted in the boxes & luggage search being completed in just under an hour which is very unusual for a L2.

Next was the vehicle search and with Barry & Ziva finding both articles in just 27 seconds followed by Mary and Robbie in just 30 seconds I thought this search would follow in the same vein. However as time went on teams started to struggle and notable was that some handlers didn’t have a systematic approach and plan to searching the 3 vehicles. Some sides of a vehicle were searched as many as 3-4 times whilst others, just the once, particulary the front of the vehicles which was to the cost of some handlers as this was where one of the scented articles was hidden. However I was impressed with the competitor’s knowledge of the wind and most used this to their advantage.

In the tables and chair search I selected a wooden cable coil which most teams found although some dogs did show some interest in the stacked tool boxes. However I was impressed that handlers knew the difference between an investigation and an indication and didn’t constantly redirect their dogs back to the tool boxes when it was just interest. Most memorable in this search was Sarah & Chaos completing the search in just 28 seconds. Well done.

Last up was the ‘Exterior Search’ and although one dog took a liking to the hoover head the majority of dogs located the scented article hidden on the cycle helmet and the tripod stand bag very quickly. Sally and Asher the rather enthusiastic GSD Asher, found both in just 19 seconds and went to be awarded the ‘Judge’s Special’ after Sally’s rather sporting attitude after things didn’t go quite to plan in the vehicle search. Well done.

1st Sarah & Chaos
What an impressive team and the handler only being 14yrs old. The way Sarah handled this rather sensitive dog was truly inspiring. Sarah never showing any nerves when things became a bit tense as often happens in a trial. Well done and a team to watch for the future.

2nd Mary Duo
Similar comment as above in that Mary kept her cool and verbal commands to minimum allowing the rather sensitive Duo to just get on with the job in hand. However when Duo did find a scented article Mary was definitely showed Duo that she was please in a very enthusiastic and uplifting way which Duo found very rewarding so well done.

3rd Mary & Robbie
A new dog sport for Robbie and Robbie looks as if he loves his scentwork career. Mary manages to rein in Robbie’s eagerness to her advantage with a good starting pre-cue and then allowing Robbie to just get on with it. A team that will go far in Mary’s capable hands. Well done.

4th Barry & Ziva .
A team that goes out searching with mission and purpose. I really liked Barry’s very positive attitude to searching never allowing the nerves to get the better of him. A good pairing as Barry successfully channel this rather keen GSD.

Entry Fees: £22 per dog. Entries capped at 10 for each level. One dog per handler.