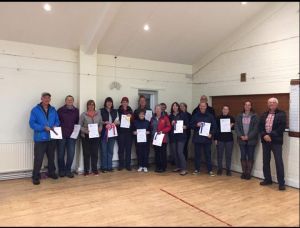 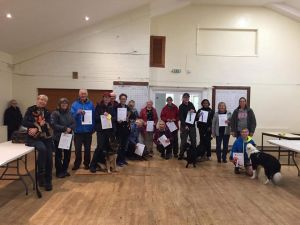 For most of the teams this was their first ever trial and clearly there was quite a degree of apprehension. That said all teams performed well and I hope the handlers feel they have got off to a good start in their pathway through the levels.

I selected the outside corner of a chair pretty much furthest from the start cones. I reduced as much ambiguity as I could to simplify the search. Only one team falsely alerted.

Sue and Isla, who ultimately won the trial, got off to a flying start with a lovely independent search in the fastest time. This team looks set to go places. Isla gave a lovely indication. Clare and Ripple, Jane and Hero, Karen and Alfie, Tracy and Stanley all worked well. Jane took time to let Hero settle before she started, Hero needed to check the room was OK before he could start work. This strategy paid off for that team. Sharon’s dog Mosi was very excited and came into the room panting but Sharon worked hard to control her dog but with a tight lead at times to curb Mosi’s over enthusiasm. Rosie’s Slinkydog stole the show for me. He is a lovely Dachshund, who was recently rescued. Rosie has hardly got started in scent work but her dog is very talented. He air scents beautifully and he is a treasure to watch. He also gave one of the best indications.

As with tables and chairs I didn’t want to confront the teams with anything other than a straight forward search. I used the handle of a bag. The handle could be pulled out to scent up and pushed back to keep the scent from being pulled out yet remaining highly accessible to the dogs. I placed the bag fairly centrally. Most teams attempted to take their dogs on a circular path one direction or another. All bar four teams found the scent. No team did any trashing of any item. Overall I was very impressed. Most marks were lost from teams with dogs on lead by having too short or too tight a lead and then restricting their dog’s movements especially when the dog knocked the scent.

Good teamwork from Alison and Finn, Sue and Isla, Clare and Ripple, Jane and Hero, Karen and Alfie, Tracy and Stanley, Rosie and Slinkydog.

The area was marked out with plastic netting and the surface was flag stones. I scented up an axel stand which I lay on its side. It had several holes to allow adjustment of its length and I placed it so the holes were sideways on. The scent could easily pass through those holes yet the scented item could not be accessed or retrieved by the dog. The item was placed top right corner of search area. The second item was a set of bicycle forks laid on its side and placed fairly near to the start cones. The scent was placed in the down tube of the forks which easily allowed the scent to come out yet prevent the dogs from reaching the cloth. Only the most ardent of dogs could retrieve the item. All other items were weighty and sizable so I neither expected, nor got any playing around by the dogs.

All the teams successfully found both items. Times varied from 25 to 234 seconds with most dogs locating both items around about a minute or less. Lovely work from Sally and Cali, Kay and Reno, Andrea and Ruby, Rachel and Hattie, Lesley and Kibo, Marney and Kipper, Ann and Rosalie. Kay worked Reno, and Lesley worked Kibo, on lead but with a well organised loose lead. We had one little ‘marking’ accident for which I deducted half the handler marks.

This proved to be quite a challenge for many of the teams. I used my Land Rover facing towards the direction of the cones and marked up with scent in the tow ball region. Next to it was a van facing in the opposite direction to the Land Rover with the scent on the passenger front wheel behind the wheel trim but easily accessible to all size dogs. The third vehicle in the row was a very clean hire car!

10 of the 14 teams found both scents. The fastest in 40 seconds was indeed the winner of the trial so congratulations to Lesley and Kibo. They are a team going places. Lesley shared the teamwork with Kibo. It was lovely to see Lesley let Kibo take the lead on both occasions she knocked the scent. This was something where several teams struggled. There was a clash of interests between handler, who was determined to complete the search of a vehicle despite their dog knocking the scent elsewhere and trying to go towards it. This meant tight leads at the very least and in some cases dogs being pulled away. Most dogs did not paw the vehicles but one team handler tasked her very small dog to search high up on the Land Rover virtually forcing her dog to stand on its back legs with both front paws on the body work for balance. Two dogs alerted on the clean hire car under the rear wheel arch, possibly some of the scent had pooled there from the middle car. All the other dogs showed no interest in the hire car. Well done to Eli who recognised when Reuben knocked the scent and she allowed her dog to go and indicate. Well done to Peter who realised his lead was way too short in the Exterior search and he had borrowed a much more suitable lead. This gave Button a much easier time of searching freely. I hope Peter will now continue to use the longer lead! Jacqui and Bo had a very hard time and indeed ran out of time without finding any of the scents. Bo had had enough. This was Bo’s last search, it was raining. Jacqui tried her best to help Bo but in the end over tasked him. It isn’t easy for handlers but in my opinion it sometimes would be better to retire the dog and enter a trial another day having examined what additional training would help.

Thank you to Marie for inviting me to co-judge alongside Charles Roberts her L1 & L2 at Goatacre. My thanks also to my scribe for L1 Linda Bowden and for L2 Ann Douglas and my very efficient runners Adrian and Sharon Smith.

For the L1 trial I had been tasked with judging the external and vehicle searches and for the L2 trial the containers and table, chairs and perimeter searches.

We were fortunate in that the rain stayed away for the duration of this element of the trial…..but we did all get wet later on in the day!
The vast majority of handlers opted to know which 3 items may contain the scent. I had chosen 3 items that were made of different materials (1 x plastic, 1 x wood, 1 x metal) and the 3 items varied considerably in size, shape and texture. In doing so I was hoping to provide teams with an interesting mix of articles to search. Whilst most dogs found the wooden item of interest and paid it close attention, handlers did well in recognising their dog was investigating rather than indicating.
With handler nerves running high at the start of a search it can be easy to forget to take a moment to settle yourself (deep breath!) and focus the dog to the task in hand. I was really impressed that the vast majority of handlers did take time to ‘set their dog up to work’. Of note was Clare Robbins with Ripple. Clare made sure Ripple was tasked and focused at the start cones. Once passed the cones Ripple immediately went to work searching methodically and gave Clare a solid correct find in the fastest time of 23 seconds.

I think we managed to see a few teams work before the heavens opened and the rain started. But the rain certainly didn’t dampen the quality of work undertaken by the teams on the vehicle search. There really was some great work demonstrated on this element of the trial.
I had placed the scent behind the front number plate with the start cones just off the right side rear bumper. There was a slight breeze that was helping the scent drift from its location down the side of the van towards its rear. All teams were successful in this element. There were 3 teams that made me smile with the courage the handler showed as their dog pulled them the length of the van to source. They were able to recognise that their dog was in odour and tracking it to source and that they just needed to go with their dog. Sue Roberton with Isla wasted no time with Isla picking up the scent as soon as her nose hit the van and tracked it well to source. Jane Turner almost had to sprint to keep up with Hero as he pulled her the length of the van in a determined effort to get to source. And finally Rosie Reid with Slinkydog who worked with a real sense of positivity and gave a solid indication.

This search gave some teams difficulty. I had placed the scented cardboard box on the outer edge of the items to be searched and the scented bag in the middle of the search area. Some handlers didn’t pay attention to which items their dog had worked, of these teams, typically the dog worked the containers on the outer edge and didn’t venture in to the middle of the items. Not recognising this cost a couple of teams their second find or they incorrectly called on a second container located on the outer edge. Two teams that worked this search beautifully were Jane Turner and Hero and Mike Wright and Poppy. Both teams ensured all containers were covered and Hero & Poppy both gave strong solid indications on both hides.

I scented the underside of a chair and the item for the perimeter search was placed so that it was the second item along the wall from the start cones. Like in the container search, a few handlers didn’t notice where their dog had worked. It is very easy for a dog to rush enthusiastically in to a search area and totally miss items near the start of the search. As handlers it is important that we note which items have been missed and still need working. One team that stood out was Lesley Rainger with Kibo. Lesley gave Kibo the space to work independently whilst ensuring the area was systematically searched. This team were very worthy winners of today’s L2 trial.

Entry Fees: £22 per dog. Entries capped at 15 per level. One dog per handler per level.