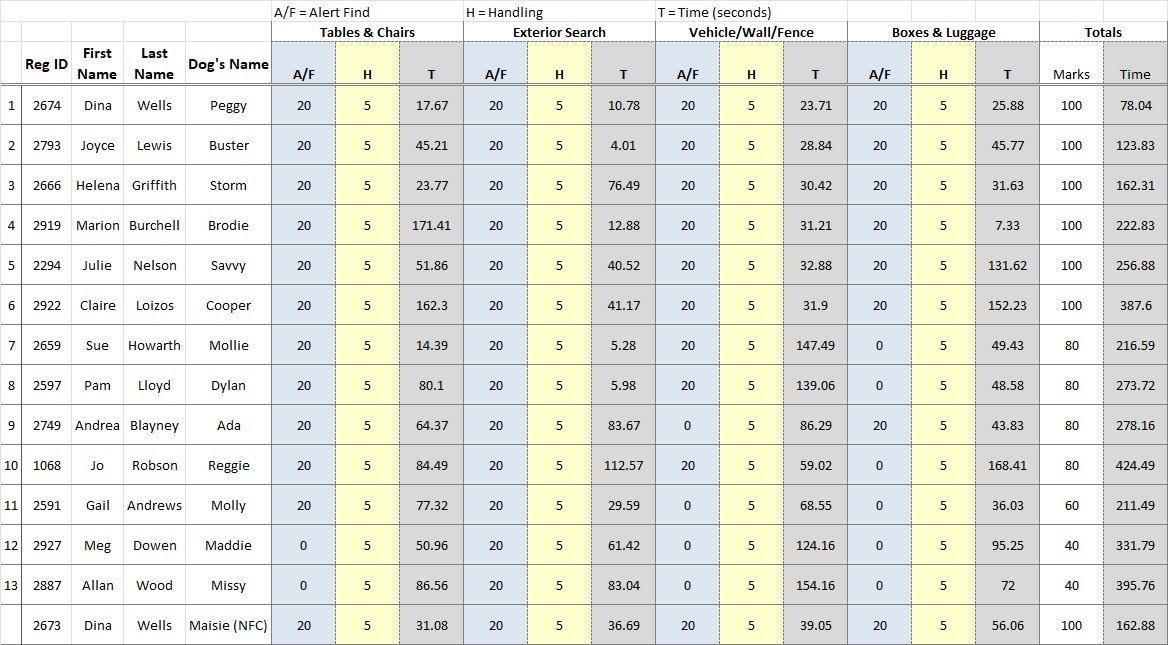 First I’d like to thank everyone who attended our Trial, there was such a lovely atmosphere, with everyone supporting each other. It was a very hot day, and so it was decided that we would conduct the two outside searches first, before the indoor searches in the air conditioned barn afterwards.

We started with the vehicle search. The scent was placed on the rear wheel, on the right had side of the vehicle. The majority of the dogs searched quickly and efficiently and followed the odour to source. A few of the dogs showed an interest in the front grill of the vehicle, where the scent was drifting through from the back. A reminder to competitors to think about the wind direction when tasking your dogs to search. Some of the partnerships found the odour in a very short time with Dina and Peggy being particularly efficient!

We then moved on to the exterior search. The scent was placed near to the start, inside a collapsible cone. Many of the dogs detected the cloves scent in the breeze on the start line, and took their handler to source very quickly. There was some lovely methodical searches by some of the other teams. All teams found the odour on this search, with Joyce and Buster, Sue and Mollie and Pam and Dylan, alerting to the find in under 10 seconds! Very impressive.

The Table and Chairs search was next. The tables were arranged in a traditional square pattern, with the scent being placed on the left hand side, from the judges perspective. Really enjoying watched the enthusiasm of the dogs in this search area, with some lovely clear indications. There were a few dog’s that took a little bit longer on this search, but it was fabulous to see their handlers keeping a cool head, and giving the dog’s the time to search without pressure. Some superb handling.

Last but not least was the boxes and bags search. The scent was placed on the left hand side of a long white box, the scent being placed closer to the exterior barrier, rather than in the middle of the room. This was a really interesting search, as many of the dogs, passed over the right side of the box quickly, without searching the whole box, which meant the scent was missed initially. The most fascinating dog to watch searching this area was a blind spaniel called Cooper, who searched completely differently to all the other dogs, but none the less – equally efficiently. Congratulations to Marian and Brodie, who completed this search very proficiently, in what was their first trial together.

It was great to have other teams competing for the first time at our trial, and we look forward to following your success in the future. Both Maddy and Missy were a pleasure to watch working.

Congratulations to all who qualified, those who obtained a clean sweep and those with placings.