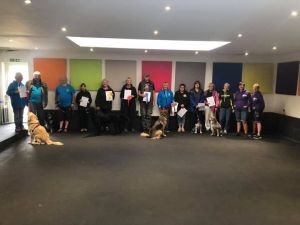 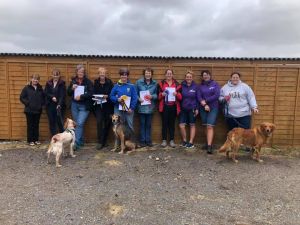 When I say it was windy it doesn’t quite describe the gusting gales we were subjected to at this great venue. At an August trial we should be concerned about the heat, not the hay darts that were being blown our way!

I drew the short straw and was outside judging the vehicle searches and exterior items for the Level 4 and Level 3 entrants whilst my fellow judge, Suzanne Olford was in the cosy luxury on the interior searches.

The vehicles was a tough one, the wind was blowing across from left to right in the 3 car line up and blowing odour all over the place. I decided the Level 4 hides should be placed on the same vehicle and with the gusting winds, this caused a lot of interest for a lot of dogs on the wrong vehicle and this seemed to hamper a few handlers. It was not an easy search because of the wind but there was some great handling and a good majority of the dogs found the hides with Janet & Maya shining through. A wonderful Level 4 team to observe.

Level 3 we had swapped out the contaminated vehicle and although the wind had dropped slightly it wasn’t much easier. Hides were laid on the first and third vehicle and I changed the start point for the Level 3’s so they were working in to the wind. Good, clean searches and great handling. It was wonderful to watch the compassion and understanding from those handlers working nervours dogs, they supported when needed and guided their dogs to work with genuine understanding. Jane & Febe really stood out for their team work and methodical search pattern on the vehicles.

The exterior search was a small area in what I am sure could have been used as a wind tunnel by Aerospace! The dogs and handlers were immediately bombarded by the odour as it was being blown straight in their face rather than across as in the vehicle search and the difference was obvious with nearly all the L4 teams showing amazing times and clear indications.

Level 3 faired just as well with Deborah & Majic making the finds in a fantastic time.

Many thanks to Jennie for inviting us to judge and ensuring the trial ran smoothly, my wind battered scribes Helen and Charles and all the entrants.

Although we are in August the weather definitely didn’t feel like it on Saturday, the wind was blowing a gust and you felt like you had to baton down the hatches, rather than do a level 3/4 trial. That aside it didn’t deter the competitors who were ready and raring to go.

I was sharing the judging with Jo Crosby and while Jo battled with the wind outside, I had the pleasure of judging inside.

The level 4 trial was being run in the morning and level 3 in the afternoon.

Table and chairs were first up. We had a mixture of success on this search but I did see some nice handling and it was great to watch Catherine and Cael who was so methodical in his search.

Next up was Boxes and luggage this was very successful with some lovely handling by Rachel and Maddie, Anne and Buzzy, and Janet and Maya. We had some super-fast times with Naomi and Buddy finding both articles in 19 seconds.

It was lovely seeing the handlers and dogs work as one.

Congratulations to all those who qualified and those who Placed.

In the afternoon the wind still hadn’t let up, so as Jo was already wind-swept Jo continued to battle the wind and stayed outside while I continued to Judge inside.

As the Boxes and Luggage was all set up, we run this first, although this can be some people nemesis this was certainly not the case. With Kim and Remy finding both articles in 38 seconds and some lovely handling from Gina and Mabel and Deborah and Majic. The afternoon was off to a flying start.

I finished my afternoon of judging with table and chairs. Even if the dogs were getting tired you wouldn’t have known it, this was a very successful search. Anglea and Woody came in and rocked it in 18 seconds, and as with the Boxes and Luggage there was some brilliant handling from Rachel and Lollie, Mark and Kibo and Tina and George who held her nerve and never doubted her dog.

The partnerships that I saw in the level 3 of the handlers knowing and reading their dogs was a pleasure to watch and judge.

Congratulations to those who placed and qualified.

It will be lovely to see all those who competed, in future trials and watch how the dynamics of the teams have grown.

Thank you to Jennie for inviting us, Lesley who scribed for me all day and the runners who kept the competitors turning up on time.

Entry Fees: £24 per dog. Caped at 30 entries. Only one dog per handler per level