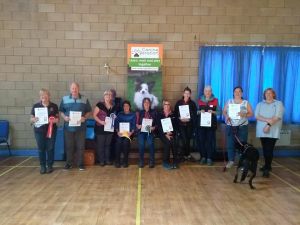 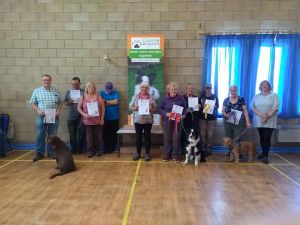 Erdington, as a venue, has some very good points (in particular the coffee room) and some less good points (minimal parking, on the corner of two fairly busy roads and directly under the flight path of almost every plane landing at Birmingham airport) but we generally make the best of it and so far all trials there have been pretty well received.

Ali Brannen and Janet Wykes had kindly agreed to judge levels 3 & 4 for me, and Karen Denton agreed to step into to the Trial Manager role for the level 4 so that I could run my own dog.

The morning went very smoothly and fairly quickly, with Michelle Rodgers and Brenda Ward scribing. Unfortunately I’d been unable to get anyone to act as runner for the morning, so I took on that role too, with Nikki Inglis stepping in before her second round of searches so that I could see to other matters.

A huge congratulations to all our Level 3 qualifiers and placers, especially Liz Beaumont with Chandra who took first place and obtained their excellence rosette at the same time.

In the afternoon Karen took over from me as TM and Gabrielle Inglis took over as runner. Jane Page took over from Brenda as scribe. I was particularly grateful to Karen as an issue arose which needed a cool and experienced trial manager’s head – I was very pleased with how it was all dealt with and resisted the temptation to try to get involved.

Well done to all our Level 4 qualifiers. Particular congratulations to Sue Taylor and Spring who obtained first place and excellence.

Also I would like to add an extra thank you to Janet for letting us use her paw-grip spray. The hall was slipperier than normal and more dogs would have struggled than did if it had not been for that spray.

Many thanks to Ellen Lindley for inviting me to co-judge the levels 3 and 4 with Ali Brannen at Erdington URC Church. A special thanks to Brenda Ward and Jane Page who scribed for me and did a fantastic job, and Michelle Rodgers, Ellen Lindley, Nikki lnglis and Gabrielle Inglis who all made sure everything ran smoothly. White dogs were used in all search areas.

For level 3, I took the 2 interior searches and started off with the table and chairs and perimeter. There was a cloves scent hidden under the front of a chair quite close to the start point, and the gun oil scent was hidden in a small set of steps at the back of the room. Out of the 10 teams, 8 teams found both scents with Rachel and Logan, and Jane and Dinah both obtaining full handling marks. They made this search look very easy with both dogs knocking the scents very early, moving swiftly to the source, and the handler having the confidence to read their indication (although with Logan displaying a very firm indication that sent the chair flying it would have been difficult for Rachel to miss it!). There was also some lovely searching from Elizabeth and Chandra, Nancy and George, Gabrielle and Elli, Nikki & Peppa, Marie and Bertie, and Barbara and Amos. It was nice to see both Gabrielle and Nikki settle their dogs at the start line and task them straight onto the first chair to be searched.

For the boxes and luggage, the clove scent was placed under the buckle of a large suitcase towards the right-hand side of the room, and the gun oil swatch was placed in the zip of a bag placed on the outside of the search area towards the back of the room. Out of the 10 teams, 6 managed to find both scents. Nancy and George completed the search in only 19 seconds and George provided a very clear indication by lying right on top of the large bag. Barbara and Amos were another quick team who only took 35 seconds, with Amos appearing to air scent both articles and move straight to them. Well done also to Elizabeth and Chandra (lovely indication with a real commitment to the odour), Rachel and Logan (nice blocking of the first bag that had been found), Marie and Bertie (very enthusiastic searching and a delight to watch), and Nikki and Peppa (great handling to avoid a false indication from a rather playful Peppa). These teams all gained full handling marks.

Overall, in first place were Elizabeth and Chandra. A very well deserved win for this team and some beautiful searching and indications once Chandra settled into the search. Elizabeth also gained her Excellence at this level, well done.

In second place, we had Marie and Bertie. A lovely enthusiastic team and some great searching from Bertie.

In third place was Jane and Dinah. I enjoyed watching how calmly Jane and Dinah worked together and how Dinah picked up the scent very early in the searches and worked to source

Fourth place went to Nancy and George. This team worked through the challenges of a very slippery floor, displayed some lovely teamwork, and raised a smile with his indication on the bag.

For level 4, I took the 2 outside searches and started off with the exterior items. The cloves scent was placed in the clip of a black tool box, and the gun oil in the holes in an extension cable casing. The distraction scents were vanilla in a hoover head, and almond on a foldable chair. Out of the 10 teams, 9 managed to find both scents and there was very little interest in any of the distraction scents. The only team that showed any interest in a distraction scent were Patricia and Joey, but Patricia read her dog beautifully to identify that this was just investigation on the chair. Jan and Mattie (lovely to see Mattie search confidently in this busy environment), Elizabeth and Cash (lovely down indication and commitment to odour), and Sue and Sunny (just a joy to watch with lovely searching and indications) all gained full handling marks. Yvonne and Drac were our quickest team with Drac indicating on both items within 25 seconds! Well done to Mary and Alfie, Christine and Teasel, Alan and Rhum, Peter and Coco, and Ellen and Meg, who all found both items. Several of the dogs in this search appeared to know where the articles were early in the search but potentially enjoyed the search element so much that they did not initially indicate on them.

The vehicle search followed. Gun oil had been placed in the sill at the bottom of the back door on the right-hand side of the Mercedes, and cloves was placed in a spoke on the right rear wheel of the VW. An issue arose early on in this search that there appeared to be some contamination on the front of the Mercedes so at that point the search was stopped. As there was no replacement car readily available, a decision was made to exclude the front of this vehicle from the search and to allow the teams that had been affected to re-run at the end. Out of the 10 teams, 5 teams found both hides. Jan and Mattie where very efficient in this search finding both finds in only 72 seconds (despite several distractions just prior to the search). Sue and Sunny (87 seconds), Mary and Alfie (90 seconds), Christine and Teasel (97 seconds), and Alan and Rhum (109 seconds) all displayed some lovely methodical searching around the vehicles. It was noticeable for some of the larger dogs, that missed the scent in the door sill, that their nose was often only working along the middle of the doors rather than along the bottom sill where the scent would have been picked up. Several of the dogs were also picking up the scent from the other side (downwind) of the scent in the Mercedes and were trying to crawl under the car. Some of the handlers recognized this and moved their dogs around to the upwind side of the car. Well done to everyone that handled the delays and disruption to this search, and especially to Peter and Nikki (running NFC) who were initially affected by this contamination.

Overall, in first place were Sue and Sunny. A fantastic team who gained full marks with an exceedingly quick time. They also gained their excellence at this level, well done.

In second place, we had Mary and Alfie. This team worked really well together and it was lovely to see how much this placing meant to the partnership.

In third place was Yvonne and Drac. Again a lovely partnership with Drac picking up strongly on the odours from the start of the searches

Fourth place went to Elizabeth and Cash. A great team with Cash demonstrating a lovely down indication which she maintains at source.

There were so many great teams today and I look forward to seeing you all continue to progress on your Scentwork journey.

First off I would like to thank Ellen Ward Lindley for asking me to Judge this level 3 trial, also thanks to fellow Judge Janet Wykes and my scribe Michelle Rodgers. Thanks also to the runners for the day and anyone who gave me coffee.

Next we moved on to the exterior item search, the first scent was hidden on the underside of a number plate, the second scent was hidden on the underside of a small stool. 7 out of the 10 teams found both hides and they were Nancy & George, Jane & Dinah, Marie & Bertie, Jeff & April, Nikki & Peppa, Gabrielle & Elli and Elizabeth & Chandra. 2 out of 10 teams found 1 hide and they were Rachel & Logan and Barbara & Amos. 1 team found 0 hides and that was Mary & Alice, although Alice was obviously not on form, Mary very patiently carried on encouraging her throughout the trial.

Well done to everyone who competed and to all those that qualified. Saw some fabulous searching and some great team work, so keep up the training and I look forward to hopefully seeing you all in the future.

First off I would like to thank Ellen Ward Lindley for asking me to judge this level 4, thanks also to Karen Denton who trial managed for the afternoon. Thank you to my fellow judge Janet Wykes and my scribe Michelle Rodgers, and to everyone who ran and provided me with coffee for the afternoon.

I was tasked with the inside searches, so we started with boxes & luggage. The first scent was hidden on the inside edge of a bag at the back of the search area, the second scent was hidden in the seam of a long box. The distraction scents I used were dog bedding and coffee. The dog bedding was hidden in a bag on the left of the search area, the coffee was hidden in a box seam on the right of the area. 8/11 teams found both hides and they were Sue & Sunny, Alan & Rhum, Peter & Coco, Christine & Teasel, Elizabeth & Cash, Yvonne & Drac, Jan & Mattie and Nikki & Peppa (who were NFC). 3/11 teams found 1 hide and they were Mary & Alfie, Patricia & Joey and Ellen & Meg.

We then moved on to the Tables & Chairs search. One hide was placed on the underside of the first chair on the left, the second hide was taped to the edge of a door. The distractions were placed on the first chair on the right and underneath a card table on the left of the perimeter. 6/11 teams found both hides and they were Patricia & Joey, Mary & Alfie, Sue & Sunny, Elizabeth & Cash, Yvonne & Drac and Nikki & Peppa (who were NFC). 5/11 teams found 1 and they were Alan & Rhum, Christine & Teasel, Peter & Coco, Ellen & Meg and Jan & Mattie.

Well done to everyone who competed in the trial and to all those who qualified. I witnessed some lovely handling and team work and look forward to seeing you all again in the future. Keep up the good work.

Entry Fees: £22 per dog, only one dog per handler per level.

Download Entry Form to book a place. Anyone wanting to submit by post needs to call first so I can reserve the slot in my online booking system.