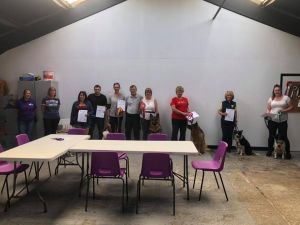 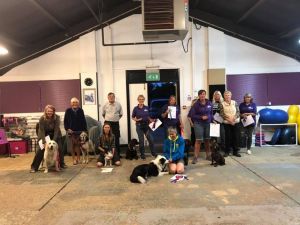 A big Thankyou to Joe for inviting me to judge levels 1 and 2 at the lovely Canvey Island.Also a big Thankyou to my scribe Karen,who did an excellent job.
It was a beautiful sunny day with a very slight breeze.We had 10 entrants for level 1,some working on gun oil and some on cloves.This obviously required a quick switch in between searches of the appropriate articles and vehicle.

I placed the tables in a T shaped pattern,placing the scent underneath the chair and to left.6 of the dogs correctly going to source.Excellent work by,Lynn and Kite and Alison and Finn,in some 34 seconds.

Owing to the gun oil and cloves scents,2 different vehicles were used.The scents were hidden in the front light cluster of both.9 of the teams correctly finding the scent.Lovely quick searching by Kerry and Bobby in some 17 seconds,followed by Julia and Ayala in 21 seconds.

I placed the appropriate scents,1 in the zip of a green suitcase,the other in a clip handle of a beige case.7 of the teams found them with ease.Lovely good independent searching by Clair and Dixie,in 8 seconds.Hot On thier heels in 11 seconds were,Paul and Ted and Kerry and Bobby.
It was very noticeable that some of the handlers were guilty of blocking the scent from thier dogs,something for them to bear in mind in future trials.

The exterior search area was held in a small,secure grass area, at the end of the building.I concealed the cloves scent in a smoke alarm and the gun oil in an extension cable.9 of the teams were successful in finding the hidden scent.Good independent searching of lead,by some of the teams.Some Good indications at source,especially by Sarah and Gizmo.

Overall,some lovely teamwork by the majority of entrants.I am sure that many will go on to achieve more success in the future.
Congratulations to our eventual rosette winners.1st Clair and Dixie,2nd Alison and Finn,also achieving thier excellence title.3rd Angela and Rocky.4th Becky and Lola.

Level 2
Following a short lunch it was on to level 2,in which thier were 11 contestants,again some on cloves and others on gun oil.
Tables/Chairs and perimeter

I set up the tables and chairs in a T shape pattern,secreting the cloves scent underneath the furthest away chair to the left,the other scent being hidden in a dog ramp on the perimeter.The gun oil was also hidden under a chair,placed in the same location and in a black plastic article on the perimeter.8 of the teams were successful in finding both scents.Lovely searching by Lesley and Loki,finding both in 29 seconds,closely followed by Lesley and Kibo in 32 seconds.

As we were running dogs on gun oil and cloves,obviously the vehicles were swapped around between searches.The clove scents were hidden in the front offside light of the 3rd vehicle and rear offside wheel of the 1st.The gun oil scents were placed in the same locations of different vehicles.
9 of the 11 teams correctly found both scents.Some lovely perciverance and patience shown by some of the handlers,proving fruitful in the end.Some good quick times shown by,Shelly and Brandi,Lesley and Kibo and Jo and Flea.

The gun oil scents were hidden in a small box and in the wheel of a shopping trolley.The clove scents were hidden in a small box,placed again in the centre of the search area and in a large suitcase,to the right.7 of the teams correctly finding both scents.Lovely search and time by,Shelly and Brandi finding both in 24 seconds,followed by Maureen and Amber and Lesley and Kibo in 43 and 47 seconds respectively.

This search proved to be the most difficult of the day for some of the teams.
The clove scents were placed in a wellington boot,at its furthest most point from the start line,and in an umbrella to the left of the area.The gun oil scents were placed in an identical wellington boot,at the back of the area,the other in a helmet.Only 2 of the teams correctly finding both,well done to,Sue and Luther and Jo and Flea.The majority of dogs not finding the scent hidden in the wellington boot.
It had been a very warm afternoon,the breeze had picked up considerably,playing havoc with scent cones,and many of the dogs appeared a little tired.
However a very successful day for many of the teams and congratulations to the eventual rosette winners.
1st Suzanne and Luther,2nd Lesley and Kibo,also gaining thier excellence rosette,3rd Alexandra and Rio,4th Shelly and Brandi.
Onwards and upwards to level 3 for some of you and I wish you every success in your future trials.

Entry Fees: £25 per dog, Capped at 10 entries. One or two dogs per handler per level.