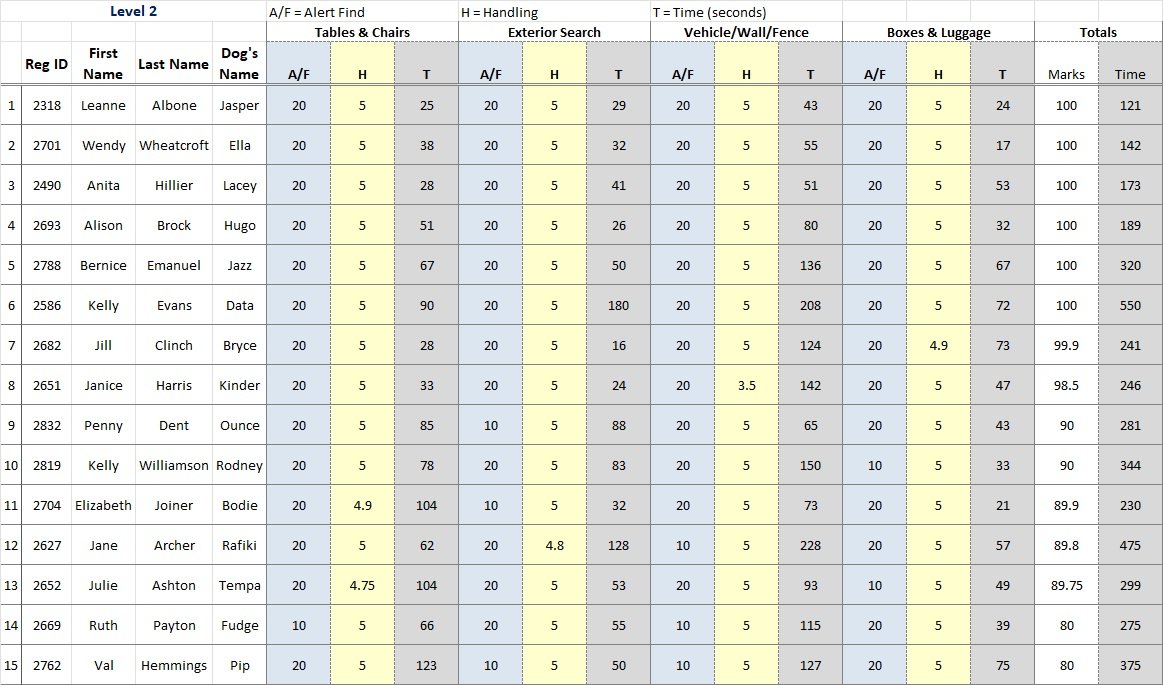 Thanks to Emma for inviting me to co-judge the level 2 trial.

I judged the outdoor searches ‘vehicles’ and ‘exterior’.

The vehicle search consisted of three cars to be searched. The scented hides were on the first and the third vehicle. The majority of teams did well and found both hides. Some teams lost time by ‘over-searching’ the blue (second) car despite their dogs not showing interest in this car.
The line-handling was of a good standard and most handlers could manage to keep their dogs’ focus on the cars in a distracting environment.

In the exterior search the handlers appeared more confident. It has been great to watch how the majority of handlers ensured that the dogs searched all the items.
Some teams lost time as they did not believe their dogs’ indication and only alerted after their dogs returned repeatedly to the scented item.

Overall, well done everybody – it’s been a great pleasure to judge such a friendly, well-organised trial.

I was lucky to have Emma invite me to co-judge her Level 2 Trial and judge Level 7 Trial on Saturday. Beancroft is a lovely venue and Emma is a thoughtful and supportive host/trial manager.

In the morning Martine my co-judge and I had 15 competitors, after a brief discussion Martine elected to judge the outside areas and I had indoors. My day started with the container search of bags and boxes. There were some good methodical searches and some delightful indications developing. The majority of teams found both items. We had a real mix of breeds today and they all work differently, so fascinating to watch. My second search of the day was the tables and chairs with the first perimeter search for some of the dogs. Again most teams found both hides. Overall a lovely group of competitors.

My general observations would be:
Winding your dog up like a spring at the start cones usually just means they run straight passed the first scent if it is an early, sniffing is fun and a little external prep before you come in to get brains into search mode is not a bad thing.
Give yourself and your dog some space, whether this is a longer line or running free, if you are in small spaces or around a table if you can step back, you can see what is happening and allow your dog some freedom to change their direction if they need to.
Try really hard not to stand still by an item that your dog has shown some interest in, as you may push your dog into indicating when they were only interested.
We all have our reasons for what we do, have faith in your dog, your trainer and yourself, what you train at home doesn’t need to change on trial day, but maybe accept that it might be a little less perfect today and that’s okay.

Level 6
There were 9 competitors at todays level 6, we had some experienced teams attending and 3 areas to cover. Beancroft is a great venue for these higher levels as there are lots of additional spaces and random rooms to use.
I choose the corridor from the kitchen as our first interior search area, I placed 2 hides, one at either end, gun oil early in the door bolt at the bottom of the entrance, and clove at the far end in a cupboard door, the corridor opens into a small storage area where a few teams got stuck, but overall 2 easy first finds to boost confidence and settle the dogs into the day.
The second search was outside on the walled patio, 6 hides split evenly as 2 of each target scent. I had asked Emma for it to be a clear as possible, the hides were as follows in one of the aeration bricks (gun oil) stacked on the opposite wall from the entrance and then following in a clockwise direction, on the corner plinth(truffle oil), under the plinth halfway(gun oil), in the corner low by the matting(cloves), in the crack on the far wall(truffle oil) and in a small hole on the last remaining wall(clove). Ruth and Dot found all 6, this was an awesome partnership. Three teams found 5, four teams found 4, one team finding 3, and the final team finding 2 but decided their dog was not in the correct mind to work today and by a good judgement call elected not to continue.
The final interior was the big study room, we had some tables and chairs left over from the morning, and very little clutter laid out, a couple of hoovers, Emma’s storage shelves, not much to distract from the job in hand, 4 finds placed out. 2 on diagonally opposite corners of the square table layout, one under the notice board and one on the skirting. Interestingly, no one found all 4? There were a few handler errors, mainly presumptions from the handlers. Lots of interest in the hoovers which were not scented. Loads of investigation of the shelves by handlers, which the dogs had given a quick check and disregarded. Also lots of people found the one on the table and did not then complete the circuit of the table but disregarded any idea there might be 2.
I will conclude with there are some fabulous teams coming through and it is lovely to see people I have trained alongside in a competitive environment.