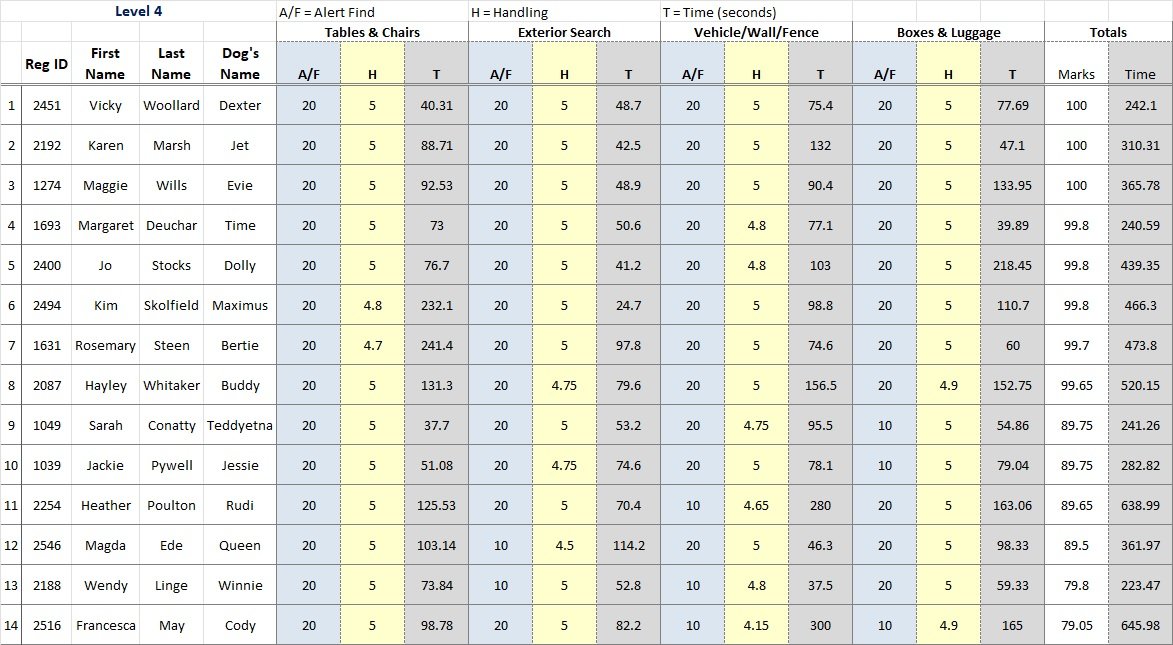 Thank you, Stacey Robinson, for inviting me to judge Level 4 in the morning with my co judge my good friend Harry Latusek. Thank you for my capable scribe, Jane a job well done. I then went on to judge Level 5 with a very helpful Harry scribing.
On the whole the handling was really good, although I felt a little help by some handlers could off cut their time down, especially when some dogs were struggling.
The two distraction scents were Shampoo and Tea. I’m pleased to say no dog indicated on the distraction scents.
Level 4
I was tasked with the interior searches, Firstly, table/chairs and permitter, followed by boxes and luggage
Tables/chairs & Perimeter
The search area was set up with two tables in a line and 8 chairs with 7 permitter items. The Gun Oil was placed on a radio on the left of the start on the premitter, the Cloves was on the join of the chair at the back of the table. Distraction scents on a foot stool to the left and a heater to the right.
Boxes & Luggage
There were 14 items, consisting of cases/bags and assorted boxes.
The Gun oil was placed in a box at the back to the right of the area, the Cloves was on the handle of a large blue suitcase to the right of the entrance. Distractions were on two small boxes both to the left as you went through the start.
There were a couple of false alerts, on different items, but mainly all dogs found the correct scents.
Congratulations to all the qualifiers. You were all very close to the rosette line up.
1st Vicky Woolland & Dexter
2nd Karen Marsh & Jet
3rd Maggie Wills & Evie
4th Margaret Deuchar & Time
After a quick lunch I moved onto the Level 5, after a short briefing we moved on to cover the 3 search areas.
Exterior
This was down the side of the building, and consisted of a wall, 3 large bottle recycle bins and a car.
There were 4 searches in the exterior, Gun Oil on the first Recycle Bin at the bottom front area, second Gun oil was in a down pipe halfway along the wall, third Cloves on the 3rd recycle bin on the back wheel casing. Fourth scent Cloves was on the car, drivers side hinge of the door. 4 minutes was allowed.

Interior 1
This was in a small room, again 4 scents with 3 mins time given. Most found all the scents in time allowed. Gun oil was placed in the middle of a stack of boxes as they came through door on the left. Second Gun Oil was under the lid of a pouffe, to the left of the room, Cloves was at the bottom of a door to the left bottom of the room, second cloves as in the door opposite side of the room on the bottom hinge.

Interior 2
This was partly into the main hall leading into a bar area. The Gun Oil was in a crack in the wall just above the skirting to the left as they came through entrance. Second Gun Oil was in a folded mat on the floor under some chairs. Cloves was on the edge of a chair to the right of the bar area; Cloves was on the left as they entered the bar area on a railing.

There was a problem of dogs pulling off the scent, which had to be replaced on 3 occasions.

Well done everyone, most of you qualified and the couple who did not, they were just not switched on today.

I’d just like to thank the entrants for their welcoming attitude, you and your dogs were a pleasure to judge. Good luck with your future trials.

Thankyou to Stacey for inviting me along to come judge this level 4 at Haynes,along with my co judge on the day,Gloria Bonnell.Also a Thankyou to my lovely scribe Chloe.It was a pleasant morning with a little breeze.
I was tasked with conducting the exterior searches.A white dog was used prior to all searches commencing.
The distractions scents of the day were,tea and shampoo.
14 teams took part in the trial.

Exterior
————
This was set up on the large car park area, to the side of the building and overlooking the grassed recreation field.
I laid out some 14 miscellaneous items.The distraction scents I hid within 2 household smoke alarms,placing these to the right and left of the search area.
I concealed the cloves scent within the head of a squeeze type mop head,placing this front right.The gun oil was hidden in the clamp of a caravan mirror and sited to the right hand side.
Some excellent searching by a number of the teams,Kim and Maximus,working of lead,were of to a flying start,finding both scents in 24 seconds.
An excellent lie down indication given by Maggie and Evie,(that’s Evie did the lie down,not Maggie).Others of note were Margaret and Time,Sarah and TeddyEtna and Heather and Rudi.
12 of the 14 teams finding both hides reasonably easily.

Vehicle/Wall
——————-
This was set up to the side of the main building again overlooking the large grassed recreational area.
The side wall of the building and 2 vehicles were used in this search.The vehicles were sited nose to tail alongside the wall.
The gun oil scent was placed on the sill of vehicle 1,between the near side doors.
The cloves scent was hidden in a crevice of the brickwork,some 12” from ground level and some 20 meters from the start line.
11 of the 14 teams found both hides,the remaining 3 finding 1.
The grass area area alongside the vehicles proved quite a distraction for a number of the dogs.
Lovely searching by Magda and Queen who picked both scents fairly quickly on the breeze,which was blowing away from the start line.
Also good handling and subsequent searching shown by,Jackie and Jessie,Karen and Jet,Hayley and Buddy and Kimmand Maximus getting in on the act to.
Good work also shown by the old timer,Bettie(13),We’ll done to your handler,Rosemary.
A good display shown all round by the majority of teams.
Only 0.3 eventually separating the top 7 teams.
My congratulations go to the rosette winners on the day…..1..Vicky and Dexter…2..Karen and Jet…3..Maggie and Evie…4..Margaret and Time.

I look forward to meeting up with some of you again,if not all of you,at some time in the future.
Good luck with you forthcoming trials.

Excellent searching by a number