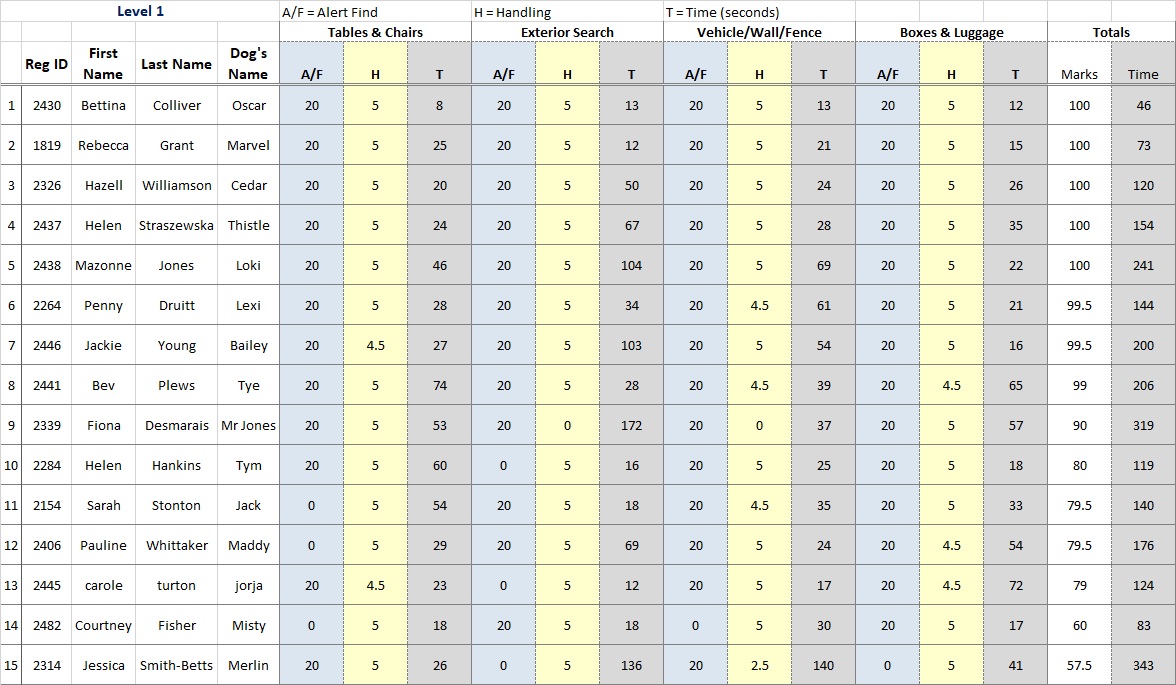 Level 7
Thank you to Heather for asking me to judge and for coming up with a solution, when I informed her that I had hurt my back and couldn’t stand for more than a few seconds. Her suggestion of sitting in a position where I could see the dogs work enabled me to judge my first Level 7.
And a massive thank you to Pauline Whittaker for your superb scribing.
Finally thank you to you the competitors for entering under me.
For those who are just venturing into Level 7 for the first time it is a big step up from level 6. As I said in my briefing you need to work out where your dog doesn’t search, then place a good-sized scent in those places. Also using cloves helps as it’s a strong scent.
Its also important to thoroughly proof against blanks. All the blanks at this trial were Velcro. Speaking to one competitor after the trial she, like a lot of people, had trained against blank cloth but not Velcro. Proofing against both cloth and Velcro is needed.

I enjoyed watching some great teams.

Justine Steele’s Chumley worked so methodically in all 3 searches, and without help from Justine. What a cracking dog and there must have been some careful training by Justine to have achieved this. Well done on your qualification and placing at your first level 7.
Alison Williamson’s Dylan worked consistently well throughout to gain their second level 7 qualification, just need to sort out those blanks.
Neil Dorman & Oscar got all scents on the exterior and 4 out of 5 scents in interior 2 but for some reason interior 1 proved to be problematic. What a cracking team!
Peter Jeffries and Dolly missed out qualifying by just one scent, bad luck Peter! What an enthusiastic dog Dolly is, just needs to be a bit more methodical.
And good luck to Helen and Nellie at your next trial, just 4 more points & you’ll be in level 8. Unfortunately, Sunday was not your day.
Last, but not least, Karen Denton & Barley and Jo Crosby-Deakin and Ehren, both on the same marks vying for first place. What a pleasure watching both of these teams working. Well done both and Congratulations!

Interior 1
This was in a storeroom which consisted of two areas, one leading into the other
4 Scents were hidden on:

Area one: one of tables (gun oil),

Area Two: one scent, (gun oil) was hidden at the back of this area where there was a good-sized gap between two stacks of chairs, the scent was behind the board that was resting on the wall. The other scents were situated on the ladder, (truffle oil), and the back of the table trolley, (gun oil).

Most dogs found 3 of the 4 scents. Massive well done to Jo Crossby-Deakin who found all 4 scents and called the area clear. It was lovely to watch you and your dog work. The scent that many teams missed was the scent on the ladder. The ladder was on the other side of the tables that weren’t part of the search and there was a chair half-way along the ladders and this seemed to affect how teams searched along this area. Many handlers either ignored the ladders or only got their dogs to search the ladder furthest away from the tables. The scent was on the ladders nearest the tables.
The blank was situated between a couple of chairs and caused no difficulty.

Exterior
This was a really easy small exterior area as it was a perimeter search in a zigzag shape. Broken glass prevented the inclusion of the bottle banks. The search started at the entrance door to the hall and went round the corner and all along the perimeter to the end of garage.
Scents were hidden on the pipe just round the jutting out corner, (gun oil), on the bar leading into the wheel of the last wheelie bin, (truffle oil) and in the far corner of the garage, (cloves).
Very few dogs picked up the scent on the pipe on their first pass; the dogs found the scent on the wheelie bin easy. In spite of the garage door scent being cloves, (a strong scent), very few of the dogs picked it up on the first pass but, with excellent handling from the human part of the teams, the dogs picked it up when they turned round and approached from the opposite direction. Given that the dogs needed to be directed right into the corner, I suspect that on the first pass, the dogs had lost concentration before reaching the end of the door. Most dogs found all 3 scents but humans were reluctant to call the area clear, given that they had only found 3 scents, obviously expecting more. Some handlers commented that they were about to call the area clear when time was called.

The blank was on the doorstep of the kitchen door and was partly visible to the dogs, (but not the humans unless they stood away from the door). This caused a problem for most dogs, maybe from an expectation of a scent on the doorstep plus sight of the velcro. Another theory is that saliva had been left on the blank by the first dog and this caused the dogs to indicate. Not a problem for Karen Denton who completely ignored her dog’s indication and, with some great handling, moved Barley on.

Interior 2
This search was in the main hall. The first two scents were on the daido rail, (gun oil) by the chair and at the back of the first radiator, (truffle oil).
The next 2 scents were on the double doors, each one tucked in the corners of the door between the skirting board and the door. Gun oil on the left-hand side, truffle oil on the right-hand side. The gun oil scent pooled on the nearby radiator, where some dogs picked up the scent. This caused owners to understandably search the radiator but when scent wasn’t found they moved on. Neil Dolman’s Oscar, and Justine Steele’s Chumley and Karen Denton’s Barley all found both scents on the doors, well done.
The 5th scent, (cloves) was on one of the bags on the right-hand side of the hall. Most dogs found this.

In this search most of the scents were hidden in what I call the small inset corners of the hall. I use the chair as an example of what I mean, put a chair up by a wall and you create a corner by the back leg on each side of the chair.
The blank was on a white board at the bottom of the hall on the right-hand side and most dogs ignored it.

I hope the test provided a learning experience for those who did not qualify. Happy training & good luck at your next trial.

LEVEL 1
Thank you to Heather for inviting me to judge Level 1 at Finmere and a very big thank you to my excellent scribe Yaz Whitehall. The weather was also kind as it was a dry, warm day but not too hot for the dogs (or us).
VEHICLE
We had 15 teams competing with Bettina and Oscar setting the pace at 14 seconds, followed by Carole and Jorja at 17 seconds
Good show all round with 14 out of 15 teams being successful
TABLES AND CHAIRS
These were set up in a square format and 12 of the 15 teams were successful with Bettina and Oscar setting a superfast time of 8 seconds
BOXES AND LUGGAGE
All the dogs worked this search really well with only one team unfortunately not being successful, Bettina and Oscar had the fastest time of 12 seconds, closely followed by Rebecca and Marvel with 15 seconds and Courtney and Misty with 17 seconds
EXTERIOR
All the teams made a good effort in this search with 12 out of the 15 teams being successful. Rebecca and Marvel had the fastest time of 12 seconds with Bettina and Oscar at 13 seconds and Sarah and Jack and Courtney and Misty both on 18 seconds
Well done to all competitors, there was some lovely teamwork and all of the dogs looked like they were really enjoying the searches. I wish you all well.
My congratulations to the eventual rosette winners: 1st Bettina and Oscar, 2nd Rebecca and Marvel who also obtained their Excellent Award – well done, 3rd Hazel and Cedar, 4th Helen and Thistle and also congratulations to Maz and Loki who also achieved 100 points with the first 5 places decided on time. Well done to you all