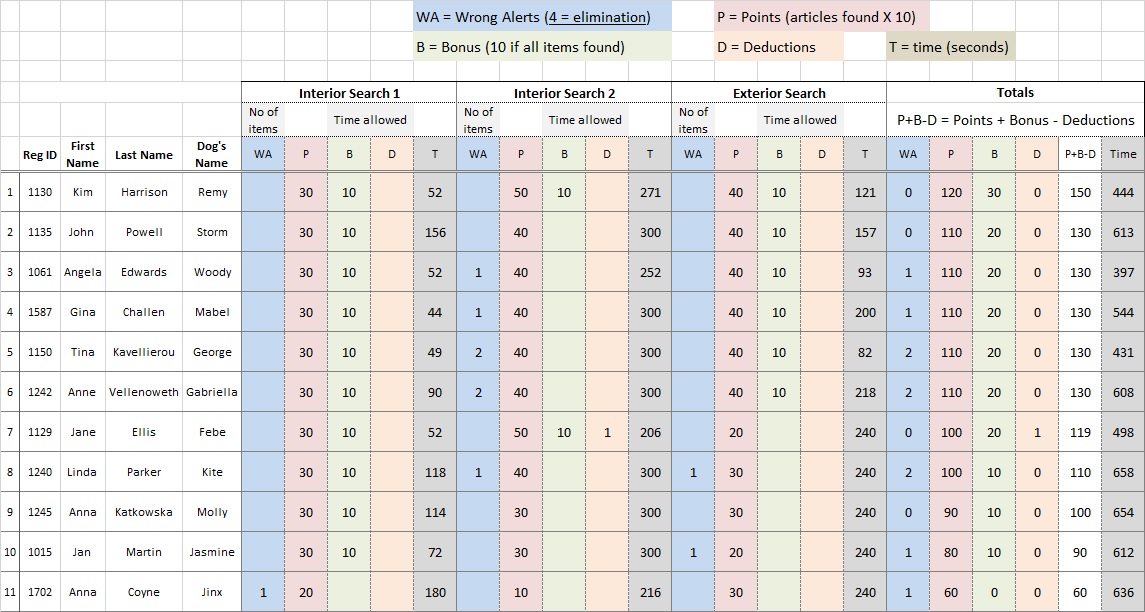 Firstly, thank you to Jennie for inviting me to judge her Level 5 at Walberton and for the perfect gifts, which both my girls and I enjoyed.

11 teams entered (should have been 12, but one team were unable to make it on the day) and they were split into 3 groups throughout the day. I love this way of organising a trial, Jennie has it down to a fine art for timings. The feedback is always (as was today) the handlers and dogs enjoy it so much more as there is not so much waiting around for their turn.

Nellie was white dog for the day in all areas, which is a duty she takes very seriously

First off we started with the exterior search. An L shaped area of fence and the front of the building. I placed 4 scents. A clove low down at the start on the 3rd slat of the fence and then a gun oil about 5 ft away from the first, higher on the same fence. A scent was placed in a hole in the wall (clove) and the 4th scent was at the bottom of a cable box on the wall (gun oil). Most teams found all of them, unfortunately the early find caught a few out with their dogs racing in and if they did go back to the start, some of the dogs found the grass too irresistible, so munched on that rather than searched.

The second area was Interior 1. There were 3 hides in this area which was a foyer type area with six doors going off to various areas, also tables, filing cabinets and other bits to search. There was an early low clove in the skirting board, which didn’t fool any of the dogs, they all found this one. There was a huge picture on the wall so I put a hide in the bottom left hand corner of the frame (gun oil), there was some really lovely tracking back to source. The final one was on a folded down leaf of a table. Most of the dogs found all the hides int his area.

Interior 2 had 5 hides. It was a hall with various windows, doorways, a stage and bits and pieces on the walls. We put out 2 trestle tables, one in front of the stage and one in the middle of the hall and 2 rows of chairs, so there was plenty to search in the 5 minutes given for this area. The hides were gun oil on a very early hide on the bottom of the curtain pully, 2nd chair in the first row of chairs (clove), edge of mat (gun oil), left back of table (clove) and right front of table (gun oil). The only hide all dogs found was on the chair and the most missed hide with only 4 teams finding it was on the mat edge, which was a late hide, so well done to these teams. Also in some cases the table was dismissed once one of the hides had been found.

All the teams worked so very well and their relationships shone through. It’s always a privilege to watch these teams getting stronger and stronger. Commiserations to the teams who didn’t quite qualify or pulled their dog due to health issues, there will be another time.

Last but certainly not least, huge congratulations to Kim and Remy. Such a worthy win, with them being the only team achieving a clean sweep. Wonderful to watch this team, such a testament to their bond. Super well done.

Thank you to all of you for letting me be a very small part in your scentwork journey and I very much look forward to seeing you all again in the near future.