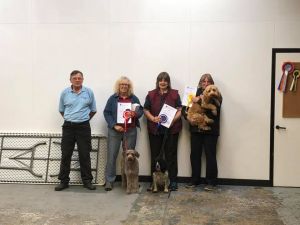 Thankyou Jo for inviting me along to Canvey to judge the level 3 and 4 trials on the day.A big Thankyou also to my scribe,Suzanne and my runner/helper,the lovely Danielle.
The forecast for the afternoon was that of heavy rain,luckily this didn’t transpire,it was warm with a very slight breeze.

Cloves and gun oil were the scents of the day,with 1 dog incorporating truffle into its searches.
Tables/Chairs and perimeter.

I set up the tables/chairs in a T shape,placing the scented chair furthest away to the left.The clove scent being hidden in a watering can on the right side of the perimeter.A white helmet was used as part of the perimeter search for dog running on truffle oil.Some good patient and systematic searching by Natali and Marley,Karen and Gunner and Angela and Woody,only 2 of the teams failed to find both scents.

Vehicle Search
The 3 vehicles were lined up nose to tail.The gun oil scent was placed on the middle vehicle,at the bottom of the rear offside door seam,the cloves on the 3rd vehicle,on the bottom seam of the front passenger door. A new vehicle was brought into the search,allowing the truffle oil to be hidden in the seam of the drivers door.All dogs excepting 1,were successful in finding both scents.Excellent searching by Angela and Woody in a time of 30 seconds and Karen and Gunner in 44 seconds.

Exterior
The gun oil was hidden in a shoe,at the rear of the search area.The cloves in a ball/helmet type article to the front left.After a switch round the truffle oil was hidden in a small tool box,placed centrally within the area.5 of the 8 teams correctly identifying both.Lovely independent and methodical searching by Angela and Woody,57 secs,Jo and Flea,43 secs and Natalie and Marley on 48 secs.

Boxes and Luggage
The scents were hidden in a handbag compartment,immediately at the start of the search area,this proved to very challenging for some of the teams.The cloves scent was hidden in a small bag,placed centrally in the search area,the truffle in another bag,which was swapped around later.5 of the teams correctly finding both.Lovely searching by Angela and Woody and Natalie and Marley.A pleasure to watch.

My congratulations to our 4 eventual rosette winners.The first two being decided on time as both were on maximum points.1st.Angela and Woody,2nd.Natalie and Marley,3rd.Martina and Phoebe,4th.Karen and Gunner.
We had 8 qualifiers and 3 clean sweeps.

Only 3 entrants participated,all running on cloves and gun oil.The distraction scents used on the day were,tea,coffee,vanilla and almond.

Vehicle
The 3 vehicles were lined up nose to tail,with a grass verge running along the full length of all 3,on the offside.Both scents were hidden in the front passenger door seams,approx 12” from the ground,in vehicles 2 and 3.Only one of the 3 teams,Jane and Febe,were successful in finding both,in a time of 49 seconds.

Exterior
The gun oil scent was hidden in a shoe, towards the back of the search area and the cloves in a heavy ball shaped object to the front left.The distraction scents were tea,being hidden in an umbrella and vanilla,hidden in a small blue plastic article.All teams correctly identified both,with Deborah and Majic quickest in 49 secs.

Boxes and Luggage.
The cloves scent was hidden in a small bag placed centrally in the search area and the gun oil in the Velcro handle of a computer type bag,placed on the perimeter of the area.All teams correctly finding both.Good independent searching off lead,by Deborah and Magic in 59 secs and Marie and Roger in 80 secs.

Tables/Chairs and perimeter
The tables/chairs were set up in a square pattern,with the distraction of almond oil being placed under the furthest away chair to the left.A smoke alarm contained the 2nd distraction,coffee,on the perimeter to the left of the start line.The gun oil was hidden in a cable holder,to the far side of the room,on the perimeter.The cloves scent was hidden in a wall clock,on the perimeter,to the right of the start line.2 of the teams finding both,the other finding 1.Excellent searching by Deborah and Majic in some 39 secs.
Congratulations to all 3 teams. 1st place,with a clean sweep going to Jane and Febe.2nd.Deborah and Majic and 3rd to Marie and Roger.
I wish all 3 of you the very best in your future trials

Entry Fees: £25 per dog, Capped at 10 entries. One or two dogs per handler per level.