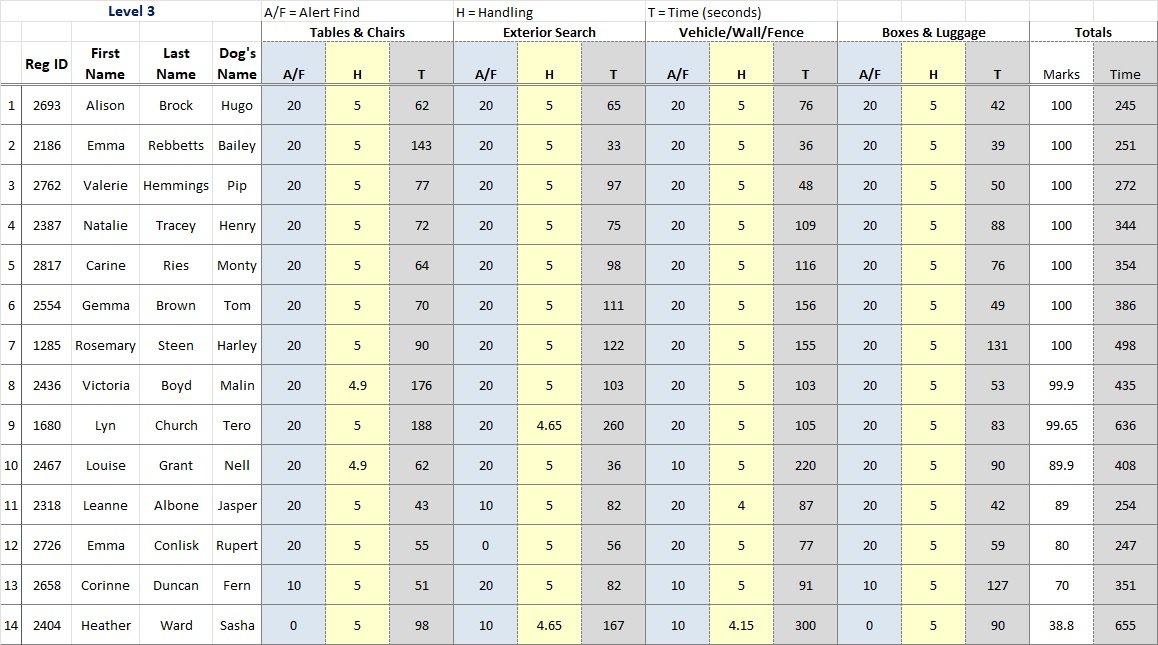 Thank you Stacey for having me to co judge with my colleague Harry Latusek. Thank you to Katherine and Bettina for scribing for me and all the helpers and runners.
It was a fab day apart from the heavy rain in the morning, my admiration to you all for braving the elements.
I did tables and chairs and boxes and luggage, level 2 table and chairs was a bit of a challenge as we had to move into the smaller room to allow a very wet Harry to work inside.Everyone coped really well às it wadsa tight squeeze for the bigger dogs.
Back to normal for the level 3 searches as the sun came out.
A lovely mix of teams at both levels, interesting to see the different styles of searching and handling..well done to all the qualifiers and congratulations to..Level 2
1. Hayley and Brodie
2.Susan and Harley
3. Lyn and Pudding
4. Natalie and Henry
Level 3
1. Alison and Hugo
2.Emma and Bailey
3. Val and Pip
4. Natalie and Henry
The top 3 in level 2 and half of the level 3 teams obtained full marks, so some great searching and impressive handling. It was a pleasure to judge such lovely teams.
Good luck in your future trials.you

I did the interior searches at both level 2 and 3.

Thankyou Stacey for inviting me along to Haynes to judge these level 2 and 3 trials alongside my friend,colleague,and co judge on the day,Josie Hickman.
We had a rather wet morning but thankfully a better afternoon,with a nice little breeze.
A white dog was used prior to all searches commencing.
I elected to judge the outside searches in both levels.
Level 2 we had 9 entrants and level 3 we had 14 competitors.

Level 2
Exterior.
————
This was set up at the front of building,some 14 items were laid out.
The scents were hidden in a black bag within the zip,placed front right of area,the other was concealed within a lovely bright orange foot pump and cited to left rear of the start line.
Despite the heavy rain,which I did make an allowance for,8 of the teams were successful in finding both scents.
Lovely handling by all,given the conditions,showing the way home in 39 secs were Kelly and Rodney,closely followed by Julia and Fudge in 54 secs.
A special mention to poor little Pudding,2 steps,shake of the rain,2 steps shake of the rain,I think you get the picture,however Lynn and Pudding percivered, Bless them and found both scents.

Vehicle/Wall
——————-
3 vehicles were lined up at the front of the hall,as best we could in between the puddles.Unfortunately the Heavens decided to open,and for this reason the decision was taken to hold a wall search within the building.
The wall along full length of the hall and across the brickwork at the front of the stage was to be used,this measured around sim 30 meters.
I chose to hide both scents in the brickwork along the front of the stage,at heights of 6 “ and 18”…
6 of the teams were successful in finding both with the other 3 finding one.
Lovely display of handling and searching displayed by,Natalie and Henry,followed by Lyn and Pudding and Hayley and Brodie.Their times being,28,52 and 56 seconds respectively .
My heart went out to Kelly,a handlers nightmare.Little Rodney decided to play hide and seek,he thought it was a great game.I had visions of Duncan Norvelle appearing at the door,shouting,”Chase me,Chase me”….
But with all due respect,he did go on to find both scents in a matter of seconds.Well done Kelly and Rodney.You deserved extra marks for the entertainment value.
A very successful trial with 8 of the 9 teams qualifying.The top 3 finishers being split by time.
My congratulations go to the eventual rosette winners.
1.Hayley and Brodie…2…Susan and Harley…3…Lyn and Pudding…4…Natalie and Henry
Well done to everyone,despite the nasty weather it was a lovely trial overall to Judge.
I look forward to see you all again as you progress through the levels

Level 3
———-
Vehicle search
———————-
Three vehicles were lined up nose to tail in the car park to the rear, and side of the main building,overlooking the large recreational grassed area.
The gun oil scent was hidden under an L plate attached to the front grill of the 1st vehicle.
The cloves scent was hidden in the sill,on the passenger side between front and rear doors,on the second vehicle.A nice breeze was blowing towards the start line.
A good display overall with 11 of the 14 teams finding both scents fairly comfortably.
Several of the dogs actually tracked straight to the second vehicle,picking up,the scent in the wind.(Spaniels).
Excellent handling shown here by,Emma and Bailey,Val and Pip,Emma and Rupert and Natalie and Henry.
Exterior
————
I laid out some 14 items in the same area as the vehicle search had been held.
The gun oil was concealed in in a shoe and placed rear centre.The cloves scent was hidden in a small household fire extinguisher and sited to the left of the start line.
Once again 11 of teams were successful in finding both.Lots of leaves blowing of the the surrounding trees proved a little challenging for some of the dogs.
Lovely searching shown here by,Emma and Bailey and Louise and Nell in some 33 and 36 seconds.
Also worthy of note were,Natalie and Henry,Val and Pip,Corrine and Fern,Gemma and Tom and Rosemary and Harley.
My congratulations go to the eventual rosette winners on the day..
1…Alison and Hugo…2…Emma and Bailey…3…Val and Pip…4…Natalie and Henry.
We had 7 of the 14 teams achieving the maximum 100 marks.
Obviously time was the factor in the placings and these were incredibly close.
A lovely afternoon watching you all.I wish you all the best success in your future trials,and I’m sure I will have the pleasure of judging some of you again in the future.