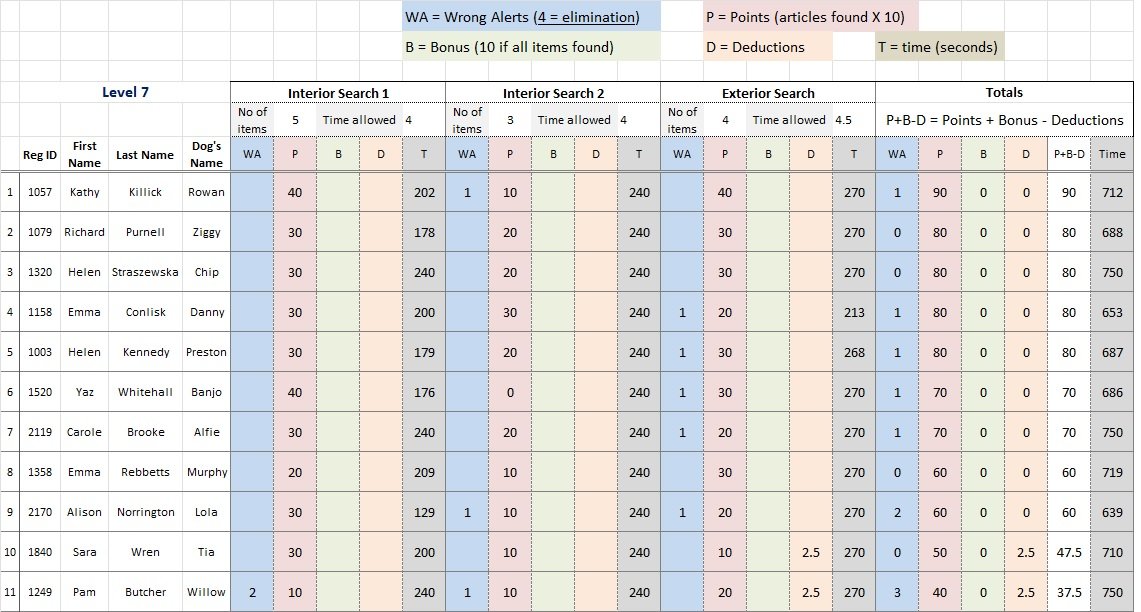 Many thanks to Heather for the invitation to Judge L7 at Finmere. It’s really helpful to work alongside an experienced triallist, so thank you to Melanie Goble for agreeing to scribe and doing a great job.

All areas were white dogged pre and post hide placement.
Interior 1
Half the main hall and the committee room. 5 hides 4 minutes.

3 hides under the dado rail, 2 were either side of the double glass doors (gun oil and clove). The clove hide presented a nice scent picture, when tasked to the door dogs were picking it up and working it up to source. Not so the gun oil, as I’ve seen before, if handlers didn’t task it wasn’t found. The same with the other dado hide, also gun oil. Perhaps it looked too daunting a task to make sure the dado rails were properly searched, maybe we expect the odour picture to do the work for us and get our dogs attention and maybe time pressure comes into play – what ever the reason I can absolutely empathise – but if dogs wren’t tasked to the the gun oil dado hides they didn’t find them. Sara and Tia, Emma and Danny Kathy and Rowan were the only teams to find both of the hides either side of the doors. Rowan went on to find the remaining dado hide too. The other hides were in the committee room. Clove under the corner of a table, truffle diagonally opposite on the back edge of a filing cabinet stood in the corner quite close to the door. The door was left ajar so forming a bit of an alcove. It looked as if the odour was spreading under the door into the hall and also around the cabinet. Handlers that tasked their dogs into the alcove were successful here. Along with Kathy and Rowan, Yaz and Banjo did well in this search finding 4 out of 5 hides.

Exterior
4 hides 4 1/2 mins
There were 2 hides that created a problem here. Clove hidden on the back of the second of three wheelie bins. We moved the right hand bin to give the dogs a way in. It was obvious as the search progressed that the odour had spread along the wall at the back of the first bin. Only Kathy and Rowan and Helen and Preston managed to work the puzzle and find this hide, well done both. Gun oil was placed in a crevice formed by the metal frame of the large shutter door and the brick wall, this hide offered the least surface area (all the others today were fully accessible) despite this it looked as if odour was collecting on the shutter however, the handler had to task their dog back from the door to the frame to be successful. It was tricky but 6 teams worked it out. Kathy and Rowan were the only team to find all 4 hides, well done.

Interior 2
3 hides 4 mins
Other half of the hall and a large storage area with loads of interesting stuff.

There were a number of chair stacks but the hides were on a isolated group of 3 stacks. Clove was at the front of the middle stack, gun oil was low on the wall adjacent to the first stack (there was room for the dogs to get their heads and shoulders into the gap), the 3rd hide (truffle) was on the other stack, close to the wall but with sufficient room to get in and turn. A few things were apparent here, firstly the clove hide was easily found but handlers then seemed to dismiss the area and moved on. Secondly, if handers tasked their dog into the gap they had to go in left to right otherwise they ended up butt to the hide rather than nose. The odour from the wall hide appeared to be spreading to the right but it was another one of those examples where handlers had to recognise that their dogs were in odour, process what they’re seeing and decide what to do about it, all very easy when you know where the hides are but not so easy under trial conditions. Emma and Danny did a great job here and were the only team to find all 3.

At the end of the day there were a number of near misses – 4 in fact – but only one qualifier, Kathy and Rowan. They present a lovely picture of teamwork at it’s best. Their pace is perfect and Kathy is methodical yet allows Rowan to do his thing, they compliment each other very well. For me they epitomise the team work that is essential at these higher levels.

Many thanks to all the competitors, you were all very sporting and a pleasure to judge. Good luck at your future trials.