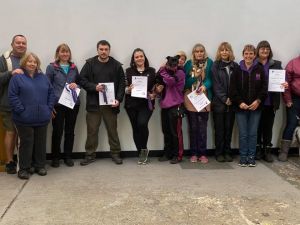 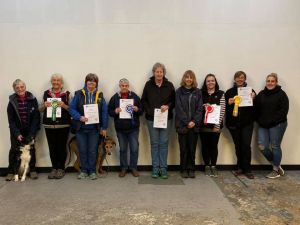 It was a sunny but chilly morning start, to our level 1 trial. Heather was judging the interior searches while I took the exterior.

The first search area of the day was the exterior. The hide was hidden on the black bin lid. This was a really successful search with 7 out of the 9 competitors finding it. We had some really fast searches with Tracy and Dobby rocketing in at 19 seconds and Kerry and Bobby at 21 seconds. I saw some lovely team work especially from Paul and Ted who held his nerve to make sure he called a correct alert.

We moved quickly on to the vehicle search which was hidden under the front number plate. This wasn’t quite as successful because of the direction of the wind. It was blowing the odour underneath the car and by the front wheel which caused 4 false alerts. It was lovely to see the owners knowing their dogs and being confident enough to call the alert in such speedy times. Tracey and Flynn, Emma and Cookie were 2 such competitors.

Regardless of speed, Shelly and Wispa, Kelly and Rosie, Becky and Lola and Beverley and Riley did some nice searches.

I had a great day judging and can’t wait to see how all the teams progress on their scentwork journey.

It was a pleasure to judge the L1 and the first L5 for Team Crosby which also gave me an opportunity to see how Jo & Suzanne latest crop of newbie Scentwork students were progressing. My thanks to Danielle, Dawn & Kerry for assisting with scribing, running and tea & coffee fetching which makes the day run so much more smoothly. Thank you girls I really appreciated your help.

The standard was pretty mixed with some very good team work whilst others, you could see, were just starting out into the world of competition. For those that didn’t pass today I felt that you all put in a sterling effort and all your dogs knew the odour but some just needed to either ‘up’ their handling, understand how to read their dogs better and learn how to control those dreaded nerves. However these are all things everyone experiences when they first start and working on your specific weakness will get you want in the end. However I felt that those who didn’t qualify took it really well and looked forward to the journey of learning more about scentwork and improving your teamwork with your dogs. Well done.

My co- judge Suzanne shared the L1 judging duties with Suzanne judging the Vehicle & Exterior Searches and myself judging the ‘Tables & Chairs’ & the Boxes & Luggage.

In both of my searches most notable was Emma & Cookie, Paul & Ted, Becky & Lola, Rosie & Kelly and Shelly & Wispa. I was particularly impressed with Emma’s handling of this rather shy Springer, Emma knowing how to bring the best out of Cookie during the day. This team went o the win the L1 in grand style. Well done. Also well handled was Ted, the rather excitable red collie, steered by Paul who had taught a very good start making it quite clear to Ted the job in the hand. This team came home with a very credible 4th place. In 2nd place was Kerry & Bobbie, much to Kerry’s delight as it seems that Bobbie has been throwing in a few false alerts recently which is always a difficult problem to solve and very unnerving for the hander. It looks as if you are well on your way now Kerry to sorting this out.Well done. 3rd place was Tracey & Dobby the Chihuahua with a big attitude. Tracey again was very good at reading Dobby’s intentions and I liked Tracey nice quiet handling helping to steer Dobby through to victory. Also notable was Shelly & Wispa the very enthusiastic cocker who found both finds in 7 & 17 seconds. Shelly seems to have found her way with Wispa now so onwards and upwards well done. Also qualifying was Tracey & Flynn, another impressive relationship as Flyn isn’t the easiest dog to read so well done you. Lastly a special mention to Rosie & Kelly a very keen Staffie and Rosie’ s good positive attitude will make the success come all the more quicker for this team.

L5 – We had 9 runners in L5 and 6 qualifiers braving this big leap from L4. The first search consisted of a treatment room, 2 toilets and part of a hall way and I hid 4 scented articles in this area. The majority of teams gave this a good go although most found 3 missing the article hidden in one of the cupboards in one of the toilets. It was the position where it was hidden that made it difficult with virtually all the dogs missing it and most handlers not asking their dogs to look there. However Emma & Cora found all 4 with ease and continued in this way going on to gained a very credible 2nd place amongst some very strong competition. Well done.

In the Exterior search 5 scented articles were hidden and it seemed that some handlers couldn’t see the man hole cover concentrating too intently on the detailed perimeter instead. Unfortunately costly for some teams. Also the ‘early’ was undervalued by some handlers who just give it a casual ‘flick’ of their hand which meant the dog didn’t properly search it. However there was some brilliant teamwork coupled with a good understanding of the wind from Jo & Ehren and Ruth & Luna working this area like professionals mopping up all 5 finds. Well done.

The last search was the other side of the indoor area which consisted of the other side of the hall, and an office. I hid 3 all in the office with the majority of handlers only finding two. The boogie was the one hidden in the filing cabinet which was tucked in a tight corner which again needed handling. However this didn’t deter Jo & Erhen, Carole & Alfie, Jan & Mattie and Laura & Peanut who found all 3 with Jo going on to win this challenging L5 and Carole coming 3rd. Also a special mention to Jan & Mattie a most fearful Kelpie that Jan just seems to get the best out of. This little chap completely looses himself when he is searching and Jan’s sincere praise gets the best out of Mattie. This team came a very credible 4th Well done.

My test areas were set up to challenge the handlers understanding of corners, doorways, early’s and article placement proportion which I think the test achieved. Thank you everyone for giving it a go.