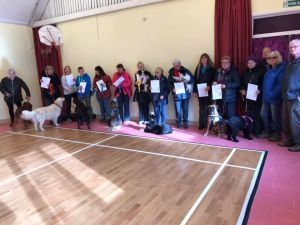 Thankfully it was a dry, if rather chilly morning as we set up the searches at Chacombe village hall. We ran an exterior and interior search at the same time so that the 14 entries weren’t hanging around too long. There was lots of enthusiastic help from early arrivals in getting everything sorted, including picking up litter after some-one’s party there the night before! Thank you everyone and particularly Lynda Stangle, Gloria Bonnell, Sonia Pidhajeckyj and Julia Reeves. I’d also like to say a massive thank you to Lynda Crossland and Sarah Beason our excellent scribes, and to Lynda for sorting out registration.

Keith Clowes took the exterior search and I took the Chairs, tables and perimeter in the lovely warm hall. The scent was on a chair on the side furthest away from the fire door, under which there was quite a draft blowing across the room. The perimeter scent was on a fan heater to the right, near to the entrance – an early! Those who took their dogs out to reward after the first find, and then sent them back in along the wall tended to get two very fast finds. Excellent work from Helen and Toby, Jayne and Salvo and Sonia and Ruby.

The three vehicles were psrked in a line on the main drive with a scent on the tow bar of the car nearest the entrance and the second scent in the door seam of the front passenger door on the third car. All dogs got the scent on the tow bar but a couple struggled to go to source on the door seam, and some handlers called it too soon as the dogs were investigating and working their way along to source. Great searches from Lesley and Kibo, Charlotte and Mabel, and Lynda and little Magic.

Thank you to all competitors for kindly accepting my decisions. There were some fantastic searches and nerves of steel as handlers waited for their dogs to investigate and reject articles. Great handling and I enjoyed seeing so many handlers who were able to read their dog’s searching behaviour. I look forward to seeing you progress through the levels.

Karen kindly asked me to judge a level 3 at Chacombe on the 29th October.

I did the exterior search first and placed the cloves scent into the end of a log. Then the gun oil on the underside of a spare wheel, near one of the wheel nut holes.

The teams worked really well, although a couple did not get both finds. The handling throughout was to a high standard. What might not have helped was the wind which kept changing direction during some of the searches.

I then did the boxes and luggage, placing the gun oil on the handle of a black computer bag and the cloves on a similar bag. One scent was placed near the entrance and one at the far end.

Again, the teams worked well with just a few missing one bag.

I would like to congratulate Helen with Toby who got a clear 100 points and as a team her and Toby were excellent.

Lesley with Kibo and Lynda with Magic, again worked really well and only dropped a fraction of a point. Closely followed by Charlotte with Mabel.

Also, some great handling from Sonia with Ruby and Julia with Dandy, who got full handling points.

I must not forget to say many thanks to my scribe Lynda, a fantastic lady who kept me on the straight and narrow.

I must thank all competitors for being such a great bunch and to Karen along with her helpers who made me so welcome.